According to the summary of the movie’s content on social networking says that  “Red Shoes is a story about a heartless mother who betrayed her father and turned away from her sick younger brother for love and desire and a daughter who dreams of revenge against such mother.” However, The development of the story is still a mystery, because according to the first trailer, we can see, Min Hee Kyung is a housewife, not special in appearance, with loose hair, she walks in a shoe store and was very happy to choose for herself a pair of beautiful red shoes, which she was very pleased to bring it home. The next scene changes, she is beaten by her husband and kicked out of the house with red shoes. Maybe no one knows what happened. 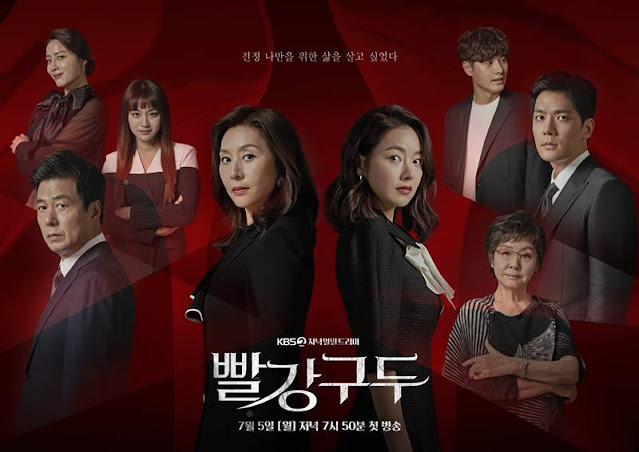 Choi Myung-gil as Min Hee-kyeong, Kim Jem-ma’s mother. She has her desires and instincts and transforms from the past when she was tied to the roles of mother and wife, then become a leader in the shoe industry with the name ‘Laura’. She also is Kim Jem-ma’s cold-hearted mother, who abandons her family after reuniting with her first love.

So Yi-hyun as Kim Jem-ma is a daughter of Kim Jeong-guk and Min Hee-kyeong, Min Hee-kyeong disappears one night, her father is killed in a hit and run case, she grows up as the adopted daughter of the aunt Ok-kyung next door. That is the reason why Kim Jem-ma has a strong desire to take revenge on her heartless mother. She thinks this mother is cruel when left her father and sick brother in search of love and success. Kim Jem-ma always seeks to find out the secrets related to, and to avenge, her father’s death.

Will she find out the truth behind her father’s death? What will she do to confront the mother who abandoned her family? Also added that Kim Jem-ma’s family was formerly a shoe shop, and the story in the film is also related to the shoe industry, so after Kim Jem-ma’s father dies, she will inherit his father’s profession and confronting the heartless mother who now as a leader in the shoe industry with the name “Laura”.

Besides Kim Jem-ma, there are Yoon Gi-seok (by Park Yoon-jae) who is grandson of Choi Sook-ja, representative of the fusion Korean restaurant. Afraid of love due to the betrayal of his former wife, closed the door to his heart due to the wounds of the past. But when he met Kim Jem-ma, he fell in love with her. He can pursue her or she will accept his love while having many troubles in her family. Can Yoon Gi-seok help Kim Jem-ma to confront Min Hee-kyeong and find out the truth about her dad death? Will they have their beautiful date and truly love each other in the end?

Jung Yoo-min as Kwon Hye-bin, Kim Jem-ma’s half-sister is a gold spoon princess character, born late to CEO Kwon Hyuk-sang and Min Hee-kyung, and grew up only being cute.